Building Three Point Bandits has been a challenging journey that took well over a thousand hours of tinkering. The entire game, including the gaming loop, physics, animation and sound engines, were designed and constructed in a piecemeal manner from the ground up. This involved multiple coding and re-coding of many elements; the physics engine itself was torn down and rebuilt a dozen times to improve performance and resolve faults.

In this blog, I attempt to recall some of the missteps and lessons gained from this exercise to hopefully save aspiring developers many, many hours of frustration. In a way, the official title of this blog should be How to build a game that doesnt crash all the time. A situation that is unfortunately not uncommon, even for name titles coming out of publishing houses. Obviously, all parts may not apply to your situation, but I hope readers will at least get some value from this blog.

As a disclaimer, this is not a how-to instructional on Android development. Others have already covered it somewhat adequately. Here, I discuss concepts that I feel are important, and by listing them, I hope to turbo charge the learning curve for fellow enthusiasts.

TPB began life as I lay in bed one night, thinking about planets and how they interacted with each other. I had earlier watched a documentary on this topic and it stuck in my brain. Having zero mobile development experience to draw from, I was foolhardy enough to think it would be fun (and easy) to model gravity on my Android tablet.

Jumping out of bed to install Eclipse while frantically skimming through tutorials and examples that I dont now recall, I relied on Java programming memories from the distant past to turn out my first app. It could be argued that this is also the first iteration of Three Point Bandits. 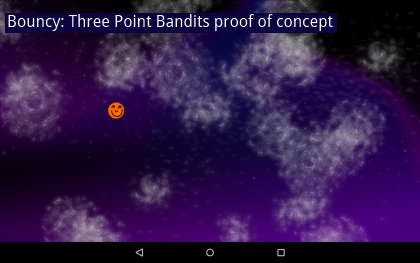 Despite being quite pleased with this first effort, I held back the impulse to dive in. Instead, I would start with something easy. The orange ball in Bouncy went on to form the basis for the idea of a basketball shooting game. It is also the default ball in the finished product. As development progressed, the realisation that it would not be a quick project became evident.

The Android operating system is a multithreaded environment. The system manages the UI main thread, which is responsible for drawing the screen, detecting inputs and all other management tasks related to the mobile device. Typically, this thread runs 60 times per second, therefore it is important to not block or slow it down too much.

The idea of the UI main thread is important because certain tasks can only be started here:

Fortunately, Android provides functions and the Handler class to bypass this rule. But, it is worth bearing in mind the underlying platform architecture to help you design better systems. This becomes apparent when we introduce the gaming loop later, which runs on a different thread.

TIP: Use runOnUiThread() to effectively call any function from any thread. It is not elegant, but works by sending the task to the UI loop for execution at a later time.

The View class is your primary interface with the mobile device. It detects user interaction with the touch screen and it lets you control how the screen is drawn. This class is, more or less, the UI loop (or UI main thread). Override these to functions to perform custom game operations:

This function is automatically called by the UI loop to read touch screen activity. You should save this information for processing by the gaming loop

This function is automatically called by the UI loop around 60 times per second (ideally). The game frame is drawn here

TIP: Activity and View classes form the core of the game engine.

Going through the literature, it is not uncommon to encounter mentions of a class called SurfaceView that supposedly allows you to control when to draw frames. This comes in handy if your screen is so complex that drawing it holds up the UI loop. Using SurfaceView, you continuously draw the frame on a separate thread and throw it to the screen when done. Some claim to achieve higher frame rates using this method.

I found frame rates decreased from around 60 FPS to 24 FPS using this method. No gains were had even on older devices that start with much lower frames. My guess is this class is no longer effective compared to the speed of modern graphics hardware. Further reading reavealed that Android had markedly improved the graphics pipeline over many iterations. This likely contributed to the performance gains of the View class as observed.

Specifically, improved low-level buffering of graphic assets probably gives the View class an advantage over the SurfaceView class. SurfaceView manages its own drawing and, by implication, does not utilise this inbuilt feature. This is especially pertinent because TPB is a memory-intensive app that relies heavily on raster graphics. Efficient access to drawing objects has shown to be an important factor in graphics performance. As such, the standard View class will likely produce faster drawing speeds if hardware acceleration is enabled (without going into OpenGL ES).

TIP: One android pixel uses 4 bytes (red, green, blue and alpha). That means a Nexus 7 (2012) device uses 3.9 MB to cover one screen while the 2013 version needs 8.8 MB to do the same. When background layering and scolling, and character animation are taken into account, it is not hard to see the memory adding up quickly. On the Nexus 7 (2012), a typical TPB game level takes up more than 50 MB of main memory for graphics alone.

The gaming loop is an important mechanism for two reasons:

TIP: I use the Thread class to implement the gaming loop.

TIP: Use System.nanoTime() to manage interframe interpolation and gaming loop speed. Although it is more efficient, System.currentTimeMillis() has a resolution no less than around 15 ms, or 1/64th of a second. This makes it generally unsuitable for the mentioned tasks where at least 1 ms accuracy is required.

Functions such as wait() and sleep() are not guaranteed to be accurate. As such, do not rely on them for timing matters. You will find they exhibit a variance and drift that depends on the device and other factors. It is good practice to verify timing with System.nanoTime() to ensure consistent and accurate performance across platforms.

If your game integrates in-app purchases, advertisements and other APIs, some tasks here will spawn additional threads as well. If any data can be simultaneously accessed by more than one thread, controls must be implemented to prevent data inteference.

For example, if the ball location is updated by the gaming loop while it is also being drawn by the main UI loop, jitters can appear during game play.

TIP: Use synchronized keyword and class AtomicBoolean to manage the drawing of game elements. While the gaming loop (GamingLoopClass.run()) is updating ball location, the UI loop (View.onDraw()) is periodically drawing the ball object in parallel. Implement a lock to ensure atomic access to ball position to prevent visual jitters.

My approach has been to reduce the amount of processing time inside the synchronized() blocks as much as possible. This not only cuts down on the chances of collision, but also reduces waiting time when it occurs. This is accomplished by performing all the costly calculations and drawing operations outside the synchronization blocks, which are only used to send drawing information (from the gaming loop) and to receive drawing information (by the UI loop).

TIP: Both the gaming loop (stepGame()) and the UI loop (onDraw()) have their own copies of the drawing information. Once Ball location is calculated, the synchronisation lock is obtained to simply transfer data to Lock Data. This happens very quickly to avoid blocking the drawing thread. Now, when the drawing thread is ready, it acquires the lock to quickly copy Ball location into Draw Data before releasing the lock. At this point whatever happens on the other thread does not affect onDraw()s ability to render the frame accurately. 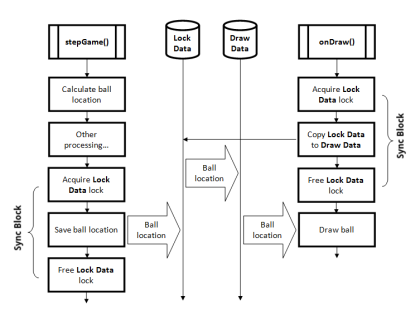 This is a simple example, but as more sprites and elements are brought in, it becomes an exercise in tradeoffs. On the one hand, putting all the processing and drawing operations inside the synchronization block ensures jitter-free performance, but hurts frame rate. Using my implementation complicates the mechanism with limits to the number of objects that can be treated this way.

In a more meaningful scenario, if two threads (for example, in-app purchase and gaming loop) modify the coin counter simultaneously, the consequences are more serious. Therefore, access to data that is visible on more than one thread can be managed using synchronization locks as shown in the above example. Complex data structures, such as a coin counter with inbuilt checksum, need to be updated atomically, so this treatment is also appropriate.

An exception exists for simple data, such as primitive types like boolean, int, long, etc., that can simply be declared volatile. This impacts program caching performance, but helps avoid complex and time-intensive synchronization.

Three Point Bandits HoHo-Holidays is out today for the festive season. Download now on Google Play. Also avaliable via direct download on the landing page. 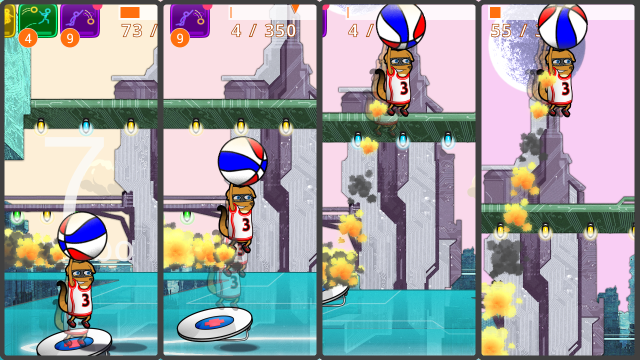 Three Point Bandits now has trampolines. Bounce over cars, robots and trouble to achieve legendary SuperDunk! status. Basketball will never be the same as you throw, spin, alley-oop and slam dunk, dunk, dunk through 14 stages using just one finger. Watch out for rampaging robots.